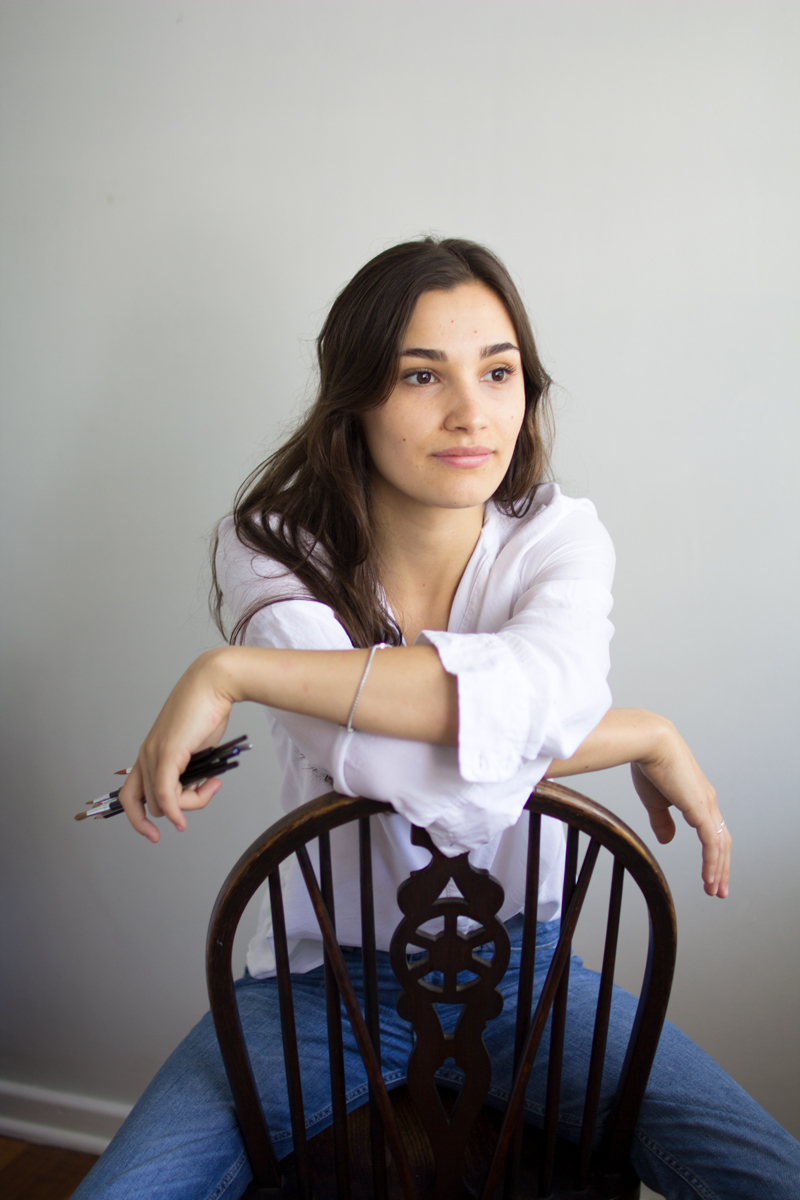 Kristi was born and raised in Port Elizabeth. After completing school in 2015, she moved to Cape Town. As a child, she had a strong imagination, constantly drawing and creating.

The first time Kristi was introduced to art was when she was just 6 years old. Kristi’s father, Deon Pretorius, painted beautiful watercolour paintings of South African landscapes and portraits. She would sit next to him with her own paint set and try to mimic what he would create.

Kristi is a determined, motivated and ambitious person who sets high standards for herself and strives incredibly hard to achieve her goals. She has always been a practically-inclined individual – This innate ability together with her passion, she was able to achieve an average of 90% for her Art Practical and was top of her class for the practical component of art in her Matric year.

In 2016 Kristi later went on to Study Graphic Design & Art Direction at a private art institution called DADA. After a year of freelance and internships as a designer, Kristi became frustrated by not having enough opportunity to create things with her hands. The task of sitting behind a computer and creating art digitally frustrated her creatively.

There is no doubt that, as with any career as an artist, that it is a challenging one. Trying to build your career and getting people to buy and notice you is not easy. Kristi started her career off by selling watercolour illustrations of animals for nursery rooms. After 8 months, in March 2018, she joined the Neighbourhood Goods Market in Woodstock, Cape Town where she sold these illustrations and more to tourists. Joining the market had allowed Kristi to network and expand her business at exponential speed.

During the 2020 Pandemic, boarders had closed which meant no more tourists were entering South Africa. While for most, this was the most tragic and debilitating time, it was a pinnacle point in Kristi’s career as it changed her as an artist. Kristi went from creating mainstream popular art to conceptualising and expressing her thoughts and emotions through her work. She had also finally had the opportunity to research, study and practice different mediums such as oils, acrylics and alcohol ink.

The theme that is constant in Kristi’s artworks is her fear for the ocean. This is more than just a fear, it is a metaphor for her life. The feeling of vulnerability, knowing that something is underneath you or in Kristi’s case, knowing that she has been left in the dark from the truth and constantly being on edge for the truth to finally prevail, is evident in her work.

Blue is the colour of the mind and is essentially soothing; it affects us mentally. Blue is serene and mentally calming – it is the theme of her work. Along with a therapist, Kristi used her art, theme and use of colour as a way to deal with emotions that she was struggling to work through. Kristi used different mediums to express this feeling, predominantly watercolour which was one of the first mediums that she practiced expressing. She later went on to use acrylic in the same manner of watercolour to express the sensation of being underwater. These two water-base and translucent mediums helped portray the motion of water. With both watercolour and acrylic, the amount of water applied to each medium is carefully thought out. With each piece looking seemingly accidental, every effect such as the veins created by the artwork is carefully directed. Layers upon layers of bleeding hues of blue are applied to create bubbles.

In her oil artworks, Kristi takes a different perspective. While maintaining the theme, colour and storyline, Kristi shows how she has progressed not only as an artist but mentally as a person. Textures, use of brushwork and palette knife are now evident to play on our senses. There are slight indications of brush strokes on the dark opaque area’s. A fan brush has been used to sooth the brushstrokes of a flat bristle brush and to create a smoothing and calming ocean. The palette knife is used to create textures of land, rock and crashing waves. Kristi subtly mixes the colours of these subjects onto canvas to carry the textures of the objects.

Her artworks are bold and strong. They are formed by a deep rooted story that she feels strongly about. Her artworks can make one feel as if they are in the abyss of the ocean, intimidated, but hopeful and strong to tackle those feelings.

Kristi has rapidly progressed as an artist since the start of her career in 2017. She enjoys the challenge of a medium and moves quickly through them. Kristi values competence and efficiency and likes to see quick results for her efforts. She has always been a fast painter and gets a considerable amount of work done in a short space of time.

There are many artist’s and teachers who have influenced Kristi’s way of practicing art. Kristi’s art teacher played an important role at analysing detail, noticing how light falls onto an object and learning first that in order for one to deconstruct the eye of an artist the artist must first learn to perfect and respect the detail found within the subject. Kristi’s eye for detail at creating photo perfect illustrations helped her learn to deconstruct her view and create abstract art.

Kristi’s love and understanding for detailed South African wildlife painting came from Sue Dickson, a South African watercolour artist who created minimalist artworks of majestic South African animals. Sue practiced, “what you leave out is just as important as what you put in.”  Kristi adopted this practice and thus creating artworks focusing cleanly on the subject matter yet creating an expansive open space of the wild Africa.

You can view some of these artworks by following the links: Animal wildlife, abstract.